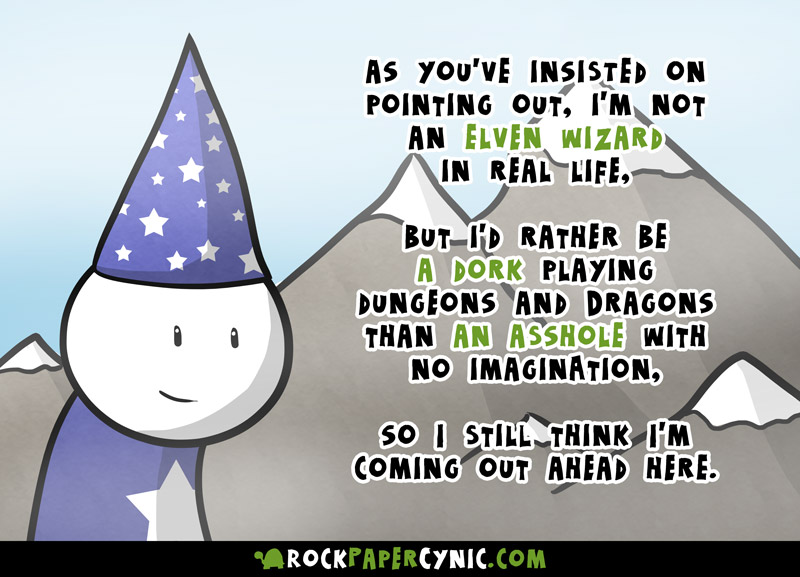 
Why Playing D&D Is Better Than Being a Jerk

I'm a long-time D&D player, although I haven't had much time for gaming lately. I started on D&D a little before 3rd Edition was released by playing some late 1970s D&D stuff that I bought for less than $2 at a garage sale. These books were back from the dark ages of THACO and featured the absolute best in garish 70s fantasy art.

Anyway, nowadays when I play, I prefer pick-up 4th Edition D&D games to introduce new people to the game. But my true joy is playing the 3.5 variant Iron Heroes using True Sorcery magic rules. Something about the game philosophy encourages interesting, highly physical gameplay. Oh, and the magic system actually feels like building a spell out of unreliable, chaotic, magical energies rather than punching a button on a dependable spell vending machine.

Anyway, a few of you have written to ask if the roleplaying system that I wrote, and that eventually led to me starting my (currently hiatus'd) second webcomic, Little Worlds, is ever going to be available. The answer is that, yes, at some point I'm going to play-test it a little more thoroughly and release it for your perusing pleasure. But this probably won't be for a while, just because of the number of projects I have on the go.