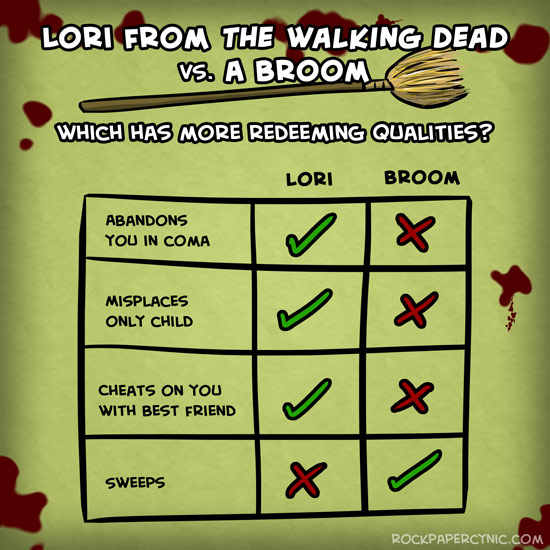 
Lori from The Walking Dead vs. a broom: which is more likable?

EDIT: IO9 featured my Walking Dead comics today in anticipation of the upcoming third season. Yay! Some new people reading it pointed out that this comic in particular is misogynist, and I wanted to take some time to talk about that.

First of all, wow, yeah, I can definitely see how this comic sounds sexist, and I'm sorry I didn't think that through more when I wrote it. Suggesting a domestic female character could be replaced with a broom should probably ring a few bells for anyone thinking critically about the joke.

It was never my intention to offend people, but, as I've written in other comics (http://www.rockpapercynic.com/index.php?date=2012-05-07) no one gets to decide what anyone else finds offensive.

So, straight up, I'm sorry that I was ignorant to the ways this comic could offend people, and I apologize to the people I hurt. Also, I'm glad we're talking about this.

I'd like to explain my intentions a little, not because I think people shouldn't be offended, but because I'd like to open a dialogue so we understand each other better.

The reason I went for the broom instead of another object is tied to the fact that Lori is, herself, quite sexist. Lori implies in her conversation with Andrea that her usefulness is contingent on her ability to keep a home. Considering that we never actually see Lori sweep, but we do see her make decisions that destroy the home she's attacking another character for not keeping, the broom was an apt (but, as you've pointed out, immensely problematic) point of comparison. She presents herself to Andrea as a superior woman because she's a home-maker, but, generally speaking, doesn't do so well at that.

If you look closely at the broom comic, you'll notice I took pains to avoid using any gendered pronouns or gendered possessive adjectives. I didn't want the point to be about Lori's gender, but about her hypocrisy.

I mean, there's a lot of characters on TWD who make decisions that negatively affect other characters (Shane is a good example) or that take the show in directions that I personally find frustrating (Dale, on occasion), but the reason I'm bothered by Lori in particular is not because she's a woman, but because she makes decisions that are both destructive and frustrating (like Carl, who I also single out) and, on top of all that, hypocritical and occasionally sexist too. She's the like a Purple Jesus of traits that are unlikable in any character, regardless of gender.

Anyway, I don't want to excuse the comic, just explain it. I wish I had realized that the punchline also implied, "If Lori swept more she'd be a better mother and wife." Yikes!

Anyway, thanks again for discussing this and sorry for not handling the joke with enough sensitivity to make myself clear and avoid offending people.

But don't worry, this has given me an idea for a comic going after Rick's shitty parenting skills!