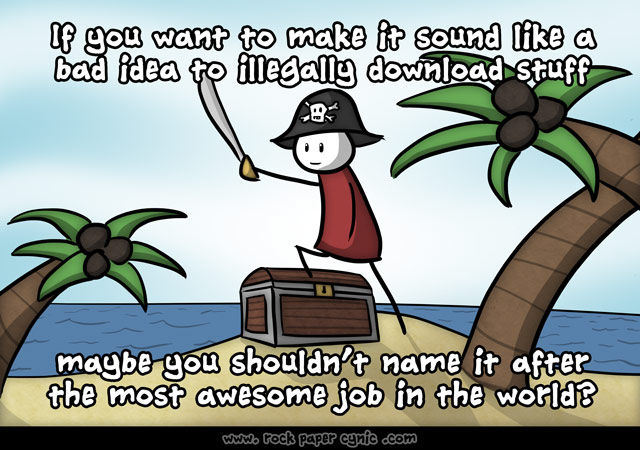 
Further Proof that Anti-Pirating Laws Are Written by Morons

Honestly, I can't think of a worse way to deter people from a life of Internet piracy. The reality of pirating is that somebody sitting alone at a computer is probably either too lazy or too cheap to support filmmakers and musicians, and so they look for a torrent. I know that's usually how I do it.

The thing is, by calling it "pirating," we make something mundane (and sometimes kind of selfish) sound as awesome as riding fearlessly around the ocean in a floating tub of cannons, gems, and gold.

My whole webcomic survives by giving away cartoons, music, and videos for free, so I'm not at all against making content available for free on the Internet, although I hope people will financially support the artists and projects they really care about. I just think that if these wackjob legislators are going to get involved, they should at least be smart about it.